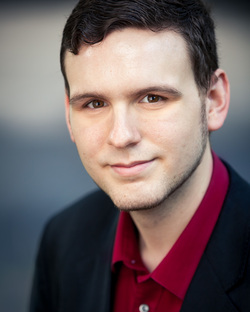 Joseph R. Kaz is a dynamic young composer established across the Eastern United States.  With performances by ensembles such as The Metropolitan Wind Symphony, Our Lady's Consort, the Silver Finch Arts Collective, and collegiate ensembles across the country, Kaz's music covers many genres and fields. In competition, Kaz's music has won many prizes including the Jack Downey Composition Prize in both 2012 and 2013, the 2010 Texas Orchestra Directors Association Composition Contest, the 2014 Ithaca College ACDA Choral Composition Competition, and the Metropolitan Wind Symphony's North American Composition Competition.  A composer primarily focused on the creation of new operas, Joseph's first opera The Song of Solomon, was premiered by the Ithaca College Light Opera in 2013.  Other recent performances have included a semi-staged reading of the opera Alice Flagg at the John F. Kennedy Center for the Performing Arts in Washington, DC and a full production of the work at the Winyah Auditorium in Georgetown, SC, and a third production of the work at The Catholic University of America.  Joseph received a Bachelors of Music in Composition from Ithaca College, and his Masters in Composition from the Catholic University of America in Washington, DC.  Joseph's primary teachers have been Dr. Dana Wilson, Dr. Sally Lamb-McCune, Dr. Jorge Grossmann and Dr. Andrew Simpson.
Proudly powered by Weebly